My first experience in the “field” was one that has stuck with me. I went out as an infant journalist in the first year of my degree & I interviewed a hotshot of the “Crime Scene Decon” world. I had nothing but my iPhone, a small purple pad & pink pen. I must have REEKED of rookie to someone like Peter, who I know had been extensively interviewed after a spate of interest from the media in crime scene cleaners. But I loved it so much. I saw body bags & photos of deceased that had been left so long they had liquefied. It was my first feature article, & I’ve never really topped it for want of a better word:

Peter Guerin faces the grim task of cleaning up after death has knocked on someone’s door. He does what is called crime scene and trauma decontamination. Or CTS Decon. Before the recent boom in such cleaning companies, it was the duty of the deceased’s family to clean up bodily fluids, human remains, blood, brain matter, and any damage left by Police in a residence. Now Peter and his staff at Bioclean step in once law enforcement and the coroner have left.

Peter has the hard exterior and no bullshit attitude of a cop. And this may be from his 30 years of serving in the Police force. His penchant for blood and strong stomach can be attributed to his eight years in Forensic Science and Crime Scene Investigation. It started as a thought in the 80’s, when Peter drove past a Police shooting that had sadly ended in casualties. A cliché sure, but a tiny light in his head just went “bing”, he says.

He sits behind the desk of his Bioclean office on a drizzly morning and seems detached as he speaks. He radiates sterility and wears a hard mask. There seems no regret for what he has seen, and no mourning of any of these people’s deaths. “It’s not me, it’s not my family… I look at it from a biological point of view.”

“I say to everyone on my team, don’t look at the photos. Don’t look at the family photos,” continues Peter. “I know where they suffered… It sounds cold and hard. It’s to preserve yourself.”

He started Bioclean in 2004. He has three full-time staff members and around five casuals. They deal with stomach churning scenarios on a daily basis.

“We don’t just rock up to the supermarket and buy black and gold bleach,” he laughs. Certainly not when tuberculosis or hepatitis is on the cards if his gory job is not done exactly right. Large amounts of blood first clot to jelly then dry into thick crimson flakes when left for a long period of time. “That’s the worst blood because it is airborne,” Peter says.

Peter and his team not only make a tragedy easier to deal with for families, but are potentially also saving their health. HIV remains dangerous for a day, hepatitis B for a whole week and tuberculosis remains a hazard if any solidified brain matter remains. 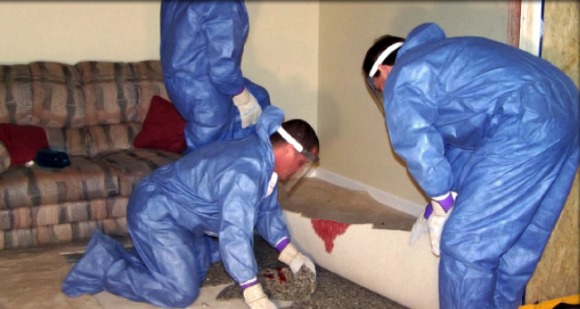 One of the less disturbing images. Google ‘Crime Scene Decontamination’ at your own risk.

Peter grew up in Surrey Hills NSW, and had a wholesome family. His mother stayed at home to take care of the family and his father was an accountant. He sees himself as the black sheep of the family. Although he has strayed from a more traditional path it seems he is making tracks. Peter has a slew of credentials, all covering the walls of his warehouse office. He boasts playfully of being the Vice President of the American Biorecovery Association and has fewer frames than he does certificates for his qualifications.

When pressed, Peter’s hard façade does falter. Long sighs puncture cocksure sentences when faced with the question of families of the dead. “It helps their grieving process,” says Peter.

The grieving of the families of the deceased is very much apart of the job, especially for Gabrielle Simpson of Clean Queens. While Peter dominates the industry in Melbourne, Gabrielle is based in NSW and brings a feminine and playful touch to a macabre business.

Her van is plastered with the image of a busty maid with glorious cleavage, suggestively holding a feather duster. “They’ll [people on the street] be smiling and looking at the girl… then they see what we do and their faces drop,” says Gabrielle.

She places high priority on the feelings of the family, and the act of softening a traumatic blow. “We go in to make sure the family aren’t stressed… [and] sometimes we get people who may not be able to pay premium prices,” she continues, “I take that into consideration.”

You would be forgiven for thinking Peter seems desensitised. But his partner John, also working for Bioclean, explains he just takes his job very seriously. “That’s just the way he is. It can make him a pain in the arse… he forgets he’s not in the Police force anymore.” John graduated from the Police Academy in 1976, along with Peter.

Peter sits at his desk projecting professionalism, while contrastingly John bustles about the office jovially calling insults and laughing. They bounce off each other like old friends, and their personalities seem to mesh like yin and yang. It’s quite warming, actually.

Crime Scene and Trauma Decontamination is not just cleaning up what no one else will. There is a raw humanistic element to the job that is arresting to the everyday person. “The trick is to not look into their [a dead bodies] eyes,” says John honestly. “You do see some really sad things,” Gabrielle Simpson also laments.

But Peter seems to have found the right mindset to tackle death and mortality without being haunted by what he does. “It is a reward, at the end of the day.”