Apparently, there was once a time when ‘bitch’ was actually offensive. I know, right? Archaic. People, more specifically women, seem to be resolved to the notion that being a bitch is way too common & way too cliché to actually balk at. If someone has a vagina, & offends you or irritates you for whatever reason, the easiest thing to call her is a bitch. Because you don’t even need to actually DO anything to be a bitch. It’s used that frequently & inefficiently. There is, however, a word that really bothers me. It bothers me most when it’s being applied to women. & that word is a “psycho”.

I don’t renounce my previous views on feminism. Feminism calls for equality, not special treatment. But given the oppressed status of women sometimes the rules need to be skewed to create a level playing field. Psychopathy is actually a diagnosable personality disorder, something that should not be belittled or stigmatised. Nay, here we are. Calling someone a psychopath may also refer to a state of ‘psychosis‘, & this is where shit starts to get overwhelmingly offensive & sexist when applied to a woman. Psychosis is typified by an inability to distinguish what is real & what is not. Fact & fiction become blurred, often resulting in delusions & hallucinations. Put simply, very serious shit.

I am no stranger to the ‘psycho’ line. If I were, I wouldn’t be writing this. I am a prime candidate for being labelled a female ‘psycho’. Psycho itself is not altogether that offensive on first consideration. I argue, it is the place it COMES from that is offensive & wrong. When being called a psycho, it arises in situations that are probably heated. Emotionally-charged. Perhaps a woman decided to finally say how she felt, in both resignation & exhaustion. For example, finally a woman decided to tell her partner she didn’t like that he kept all his passwords private (IE. under lock & key with a drop of blood & the sacrifice of a baby goat to unlock them). Her partner gawks at her, heckles raised, & calls her a PSYCHO for feeling as though she needs to have that kind of access to his private life. Is she confused about what is real & what is not? Is she DELUDED? No. She’s insecure & their relationship is experiencing some sort of turmoil. But, she is not psychotic. Perhaps the man is psychotic for believing he could keep so much from his partner while still keeping HER too. But we don’t call him the psycho, do we? The woman is psycho. There are no rights & wrongs in this scenario, mind you. I am merely trying to articulate how gendered this word is.

What may even be worse than a man calling a woman psycho (men are not evil. I love men. I date a man. Feminazi’s are feminists scorned in my opinion) is a woman calling a woman psycho. As if she herself has never been unfairly labelled mentally unstable, we women will still turn around & do the same thing to someone else. A woman calling `’women’ as a generalised-collective psychopaths makes me so sad. To watch females take such a gendered & unequal patriarchal myth & continually recycle & re-use it is horrible. Women are not psycho. Women have genuine feelings, & when they voice these feelings it is not because of some deluded whim. Women’s feelings are not hallucinatory. They are real & should be treated as such. Too many times women call other women psycho’s because of how they act when dealing with difficult emotions. Maybe they add every girl on Facebook that their ex adds. Psycho? Apparently. Imagine the consuming inadequacy that is driving that girl to do that, though. She’s not some crazed stalker who is going to burn down your house in the middle of the night, she’s probably looking at your pictures, picking out everything that is AMAZING about you, & crying about it to her best friend because she feels like you are leagues better than her. These are just feelings. Maybe you wouldn’t have done what she did, but understanding why she did it easily explains why she is not, in fact, a legitimate psychopath. Just hurt. 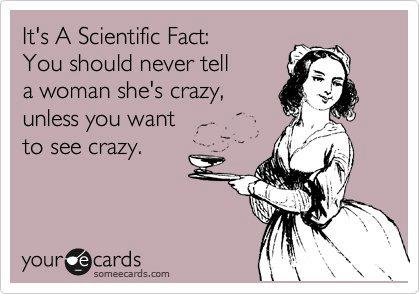 The ultimate paradox, tell a woman she is crazy & that’s when she will become “crazy”.

When a man gets called a psycho, he has to have done something pretty abhorrent to earn the title. Say, glass someone in the face over some sweet pussy in the club on the weekend. This is about 5,000 huge leaps above getting emotional over another woman or being insecure. Glassing someone in the face? Only JUST earns the ‘psycho’ tag (& probably jail time). Not letting your boyfriend speak to that other girl who calls him after midnight every weekend because ‘friends’? PSYCHOTIC, OH MY GOD, ADMIT YOURSELF FOR PSYCHOLOGICAL ASSESSMENT! HOW DARE YOU!

Don’t call a woman a psycho. Unless she burned your house down. & if she didn’t? Well, call her a psycho, & see what happens next I guess…